Let’s say you’re buying a house or refinancing and you need PMI. What are your options (besides putting down 20%)?

Why is the second mortgage at a higher rate?

Because being in second position is a riskier prospect for a lender than being in first position. If you fail to make your payments, the first lender gets paid off first; the second lender gets paid off second. If your home has dropped in value and it has to be sold at auction, it might not yield the lender enough money to pay off the second mortgage.

Who issues the second mortgage?

How does a Home Equity Line of Credit work?

WHAT IS PRIME LENDING RATE?

Prime Rate is the best interest rate on loans that’s offered by banks to its most preferred and creditworthy borrowers. It varies based on federal funds rate.

Can you get a fixed rate second mortgage instead of a HELOC?

Yes. You can ask that your second mortgage be fixed instead of having the rate variable based on Prime. However, your rate will still be higher than the rate on your first mortgage.

Which is better — a fixed rate second mortgage or HELOC?
That depends on three things:

Why does it matter if you can (or can’t) pay down the HELOC?

On the other hand, if you don’t foresee any ability to pay down the HELOC, you should compare the HELOC to a fixed rate second and figure out where you think rates are going to go. For example, let’s say you are choosing between a HELOC at Prime + 1.50% (which today would be 7.00%) and a fixed rate second at 7.25%. If you think Prime won’t change anytime soon, you would choose the HELOC. However, if you thought there was a pretty good chance Prime would go up over the next few years to 5.75% or higher, then your fully indexed rate on the HELOC would be Prime + 1.50% or 7.25% (the same rate as the fixed second mortgage). And it could go even higher. In that case, you would choose the fixed rate second. 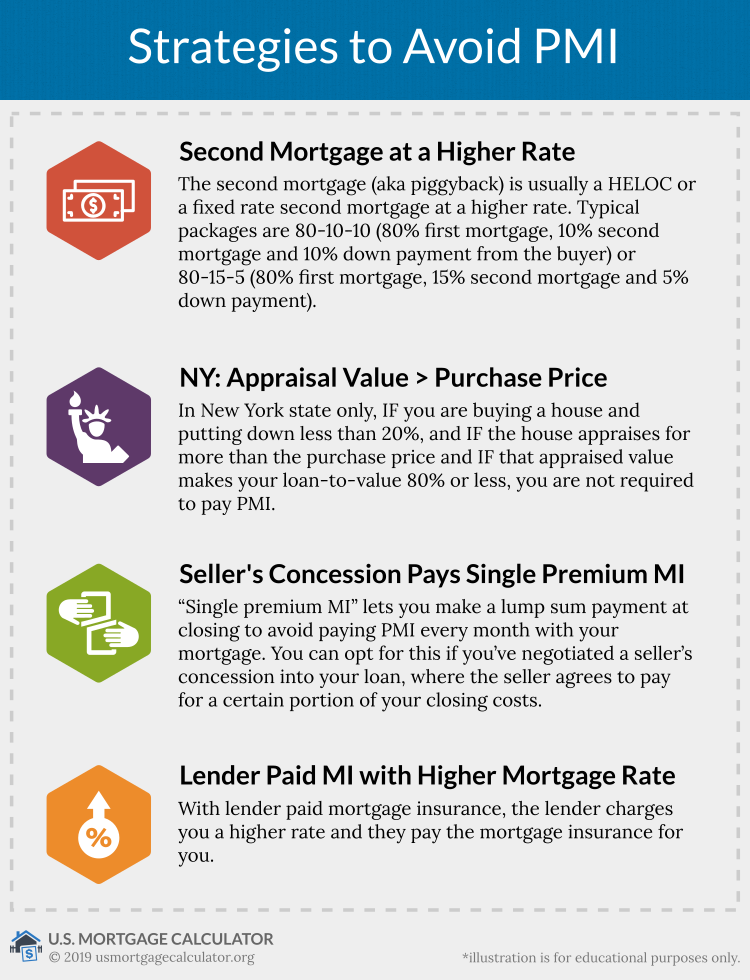 How Can You Avoid PMI and Not Take a Second Mortgage?

Here’s a tip for people buying in New York state only: IF you are buying a house and putting down less than 20%, and IF the house appraises for more than the purchase price and IF that appraised value makes your loan-to-value 80% or less, you are not required to pay PMI.

How does that work? Don’t lenders usually lend off the lower of the purchase price or appraised value when calculating loan-to-value?

Yes, except in this state-specific instance. For example, you are buying a house in Albany, NY for $225,000. It’s an estate sale and you know you are getting a great deal. You are putting down $25,000 which makes your loan-to-value 88.9%. Normally, you would think you would need PMI because you are putting down less than 20%. But when the bank appraises the house, it comes in with a value of $250,000. This means that your $200,000 loan amount is 80% of the value, and in New York, that means the lender cannot require you to have PMI.

What Are the Other Ways to Pay PMI?

Instead of doing “zero monthly”, you can opt for “single premium MI”. With this form of PMI, you make a lump sum payment at closing then you do not have to pay PMI every month with your mortgage. Let’s use the example of the house selling for $300,000 and you are putting down either 10% or 5%. Using these numbers, single premium MI would cost $3,996 for 90% financing and $6,156 for 95% financing. That’s a lot of money, but if you’ve negotiated a seller’s concession into your loan where the seller agrees to pay for a certain portion of your closing costs, this option might make sense for you.

Lastly, You Can Do What’s Called “LPMI” or Lender Paid MI

With lender paid mortgage insurance, the lender charges you a higher rate and they pay the mortgage insurance for you. How much higher? Typically for 90% financing you are looking at ½% higher. If you’re borrowing 95%, the rate could be as much as ¾% higher. This option might make sense if you’re in a high tax bracket and want to maximize your interest deduction.