After another rise in FHA mortgage insurance rates during the last year and the announcement that borrowers may be locked into those payments for the life of their loans, a lot of people are taking a second look at second mortgages. Piggyback seconds, those small mortgages used in conjunction with a Conventional mortgage at the time of a home’s purchase, were written off by many lenders as one of the most evil products imaginable (along with negative amortization and interest only loans) after the real estate collapse, but they never really went anywhere.

Some borrowers still use them, but we don’t talk about it because there were too many shifty lenders riding similar products into the chasm left behind by the bursting of the housing bubble – the wounds are still too fresh. Still, when used properly and with reasonable terms, these piggyback loans aren’t bad at all. In fact, there are times when it may benefit you to choose a piggyback second over a mortgage product with mortgage insurance. There are a lot of factors to consider when borrowing for a home, including whether or not to pay for mortgage insurance.

What is Mortgage Insurance? 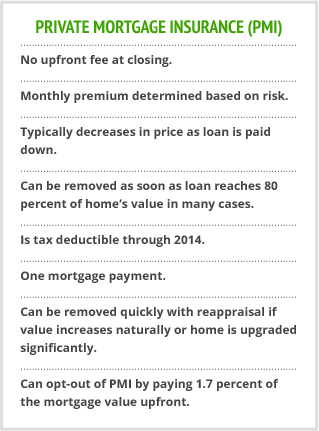 Mortgage insurance is required on many loans when there is a greater than 80 percent loan to value, but the price varies considerably between loan products. PMI is priced based on your risk of default, so the lower your loan to value and the higher your credit score, the cheaper it will be. Don’t expect miracles, though, you’ll still end up paying from a few hundred to over a thousand dollars a year for the privilege. Some banks will give you the option to pay all your PMI upfront at closing, to the tune of about 1.7 percent of the value of your 30 year mortgage — ask your banker about this option if you have the extra cash. 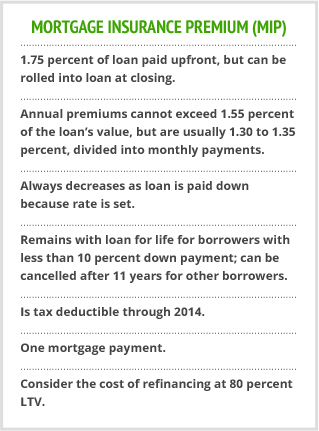 The price of MIP is predetermined, but is still somewhat risk-based. A typical 30 year mortgage with less than five percent down requires 1.35 percent of the loan value as an annual MIP payment; the same loan with more than five percent down only requires 1.30 percent of the loan value as an annual payment. It’s not the end of the world, but don’t forget that this is in addition to a 1.75 percent upfront mortgage insurance fee. The upfront mortgage insurance fee applies regardless of amortization term or LTV ratio. FHA loans originated during or after June 2013 must also pay MIP for the life of the loan unless the borrower has a down payment of at least 10 percent.

PMI and and some MIP can be cancelled when the loan amount is paid down to 80 percent or less of the home’s value, but you’ll probably have to request that your lender cancels the mortgage insurance. On the few FHA loans that allow mortgage insurance cancellation, it’ll happen automatically when you’ve paid down 22 percent of the mortgage, but no matter how many extra payments you make, you’re still on the hook for a minimum of 11 years of MIP. Typically, you don’t have to wait any extra time to cancel PMI if your loan to value breaks 80 percent.

What are Second Mortgages? 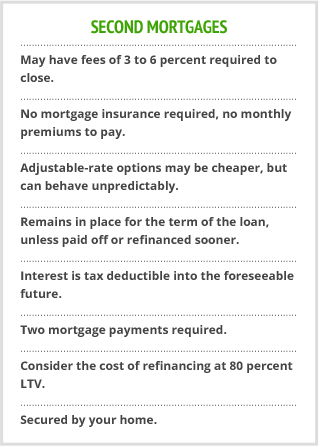 Second mortgages are just that — a second mortgage on your soon-to-be home. They appear in two different forms, open lines of credit and closed lines of credit (often referred to as piggyback loans). These mortgages are designed to work with Conventional loans to allow a borrower to avoid PMI entirely. Instead of buying insurance against your default, lenders allow another bank or investment group to put their money up on a bet that you won’t fail to make your payments. If you do, this second mortgage is the second to be paid off when your home is sold by the bank during foreclosure — if they can’t recoup the primary mortgage, the secondary doesn’t get paid at all.

There’s a lot of variance in second mortgages: they can be made for nearly any amount (although five, 10 and 15 percent notes are common), with fixed or adjustable rates, for nearly any length of time up to 30 years and with wildly varying rates and fees. If you’re going to use one to avoid PMI, it’s a good idea to shop around and make sure you’re getting the best deal available, otherwise you might as well just pay the PMI. Normally, additional fees will apply for originating and closing these second mortgages that also need to be considered when determining whether mortgage insurance should be avoided.

Unlike mortgage insurance, a second mortgage can’t be cancelled or eliminated unless you pay it off in full. Like your primary mortgage, the secondary one is secured by your home and it follows you in the same way. If you get into trouble with your second mortgage because of a rate fluctuation, you can put yourself at serious financial risk — after all, you’re not going to be late on just one mortgage payment, you’ll be late on two. The damage to your credit is twice as bad and happens twice as quickly.

Choosing Between Mortgage Insurance and a Second Mortgage

There is absolutely a time and a place for both mortgage insurance and second mortgages, but you’ll have to take a hard look at your finances and be realistic about your ability to repay before you make the final decision. If you can’t come up with five percent as a down payment, you don’t have any options — you’re stuck with mortgage insurance and an FHA loan, but you can always refinance when your home has increased in value or your mortgage has been paid down considerably. Conversely, if you’ve got a down payment of 20 percent or more, you don’t have anything to worry about when it comes to mortgage insurance.

It’s those borrowers in between, the ones who scraped together five to 15 percent for a down payment that have a difficult decision to make. On one hand, there’s mortgage insurance, from either FHA or your bank, and on the other is the secondary mortgage market. Both have benefits and costs, and that muddies the waters considerably. The best plan of action for you is to get quotes from mortgage lenders for secondary mortgages, so you can do a very thorough cost analysis on each product. You should make sure each lender includes all closing costs and fees in the information you gather, because it all counts in the end.

Break Out Your Calculator

Once you’ve talked to several different mortgage lenders, collected rates on the mortgage configurations you’re considering, it’s time to put your pencil to paper to figure the total cost of your options. Even if you’ve only got an FHA and a Conventional mortgage with PMI to choose between, you’ll do yourself a huge favor to do the math. The paperwork your lender provides you should show you clearly how much the various loans will cost over their lifetimes, but those numbers don’t include mortgage insurance premiums or upfront fees. Go ahead and add these figures in, and don’t forget to include origination fees, points and other loan-related costs when you’re calculating the true cost of your options.

Note: These are only estimates, please check with your bank for current rates and fees.

As you can see, after 30 years of on-time payments, you’re ahead by $9,060.40 to go with the Conventional loan over the FHA. Let’s look at another scenario, shall we?

Let’s say you’ve found a bank that will give you the piggyback option, but it’s an adjustable rate. Here we’ll compare a 90% LTV Conventional mortgage with PMI to an 80% LTV Conventional with a 3/1 Piggyback amortized over 30 years with an initial rate of 5.5% and an interest cap of 9.5%. Your second loan has no additional closing costs and, being a 3/1, is fixed for three years, but it can flex a percentage point each year up to its cap. Assume it flexes as often as possible and never goes back down once it has flexed.

So far, we’ve assumed you’re going to keep the same loan and not refinance at any given point. What if you did? Rates are unpredictable and difficult to foresee, but we can play with the figures a little and see what happens when you reach 80% LTV and are ready to refinance.

Why don’t we look at our three loans and see what happens if we instead refinance them when they each reach an 80 percent LTV? Payment #73 will bring you to your 80 percent LTV, so that’s what these figures are based upon.

Refinancing these loans will cost you the same, since you’re going to roll into the same type of loan no matter which you started with — as you can see by breaking them down, after six years you’ll have paid considerably less with a 90 percent LTV Conventional loan. The Conventional loan is still winning in our fantasy world, but remember that’s all this is – the numbers can change considerably in the real world. Since homeowners sell every five to seven years, this is also a good approximation for someone who intends to move an average amount of times in their life.

But what if you’re considering refinancing your 90 percent FHA down the line to shed the MIP instead of paying it for the full 11 years? Let’s assume that you’re rolling into another 30 year fixed mortgage, at a rate of either 5.0 or 7.5 percent. Your LTV won’t be at 80 percent until you’ve paid payment #73 — rates can change a lot in six years. Would it be better to keep the PMI?

For now, you’re still better to pay the MIP than to refinance your 90 percent LTV FHA loan down the road. Even if you had a small 3.5 percent down payment and had to pay MIP for the life of your FHA loan instead of losing that expense at the 11 year mark, you’d still be only looking at $275,274.22 in lifetime expenses. Unless rates are decreasing, it rarely makes sense to plan on a refinance, and certainly not in this case.

The numbers are only part of the picture, though, and certainly yours may be different than those I’ve calculated. Extra payments and dramatic increases in home value can change your situation pretty dramatically — but when you’re choosing a loan, you can’t count on anything remarkable happening.

Ultimately, you’ll have to choose which products makes the most sense for your situation, no matter if you intend to spiff your house up and sell it in when the market recovers or you plan to have your ashes scattered in the back yard. Arm yourself with as much information as you can and make your decision carefully — you’ll still be happy with it years from now, whether it’s time to refinance your second or drop your mortgage insurance entirely.